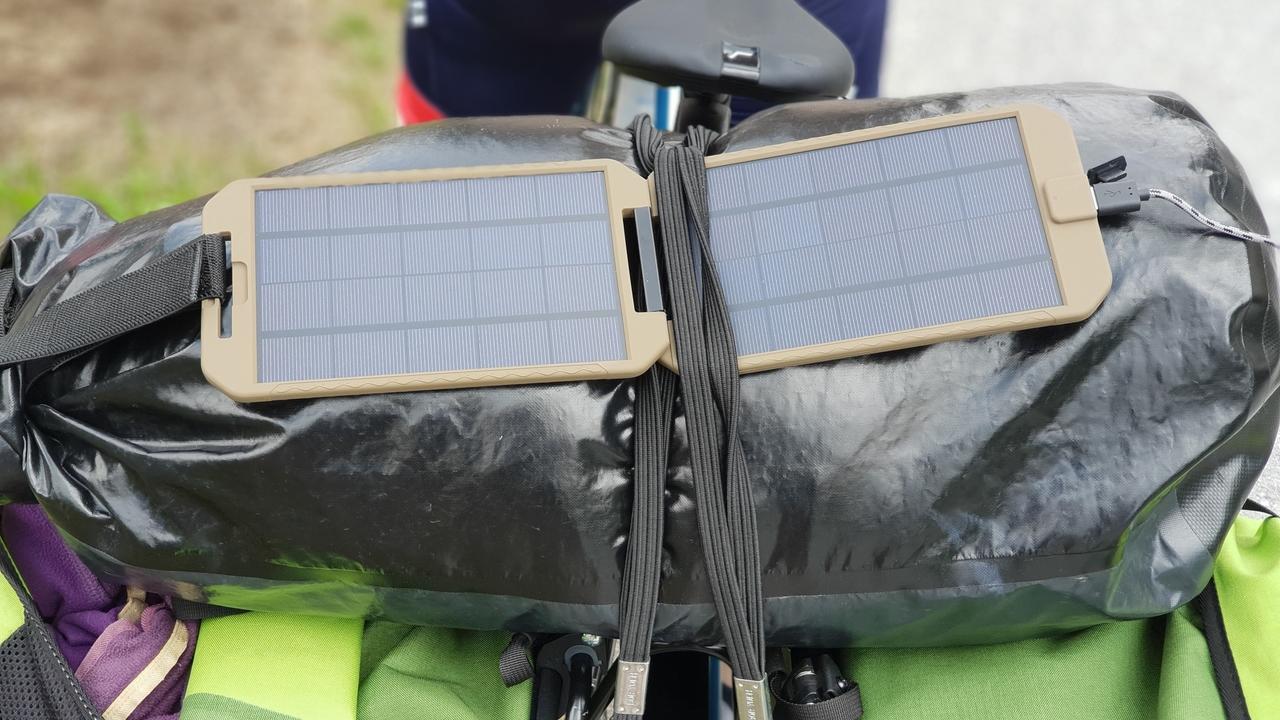 The Powertraveller Tactical Extreme looks like an adventurer's solar charger kit of choice. It almost looks too good to be true on paper: a durable charging kit that can refuel anything from SLR cameras to headtorches.

This review is based on 6 months of testing, mainly through daily use on the Rhine Source to Sea Cycle: some 3 weeks and 1700km from Switzerland to London. I have also taken the power pack to Slovenia for 5 days of alpine mountaineering and the whole setup for 2 weeks in South Africa. Plus, it has had more domestic use over the 6 months.

A Quick Word About "Tactical"

Although I don't think I'll use the pouch, I actually prefer the brown coloured charger and panel. It blends in to the environment better - which I guess is the idea! - without it being camouflage printed.

How the Powertraveller Tactical Extreme works

The Powertraveller Extreme is very easy to set up. Simply open up the solar panel and wait a few seconds for the panel to wake up. In practice, you can use that time to set up the other end. Plug the USB to USB-C cable in: the USB end into the charger and USB-C end into the power pack. There are little rubber covers over the ports.

And that is really it for charging. Strap the panel to your bags and away you go. The light on the panel shows green for good light and red for overcast. 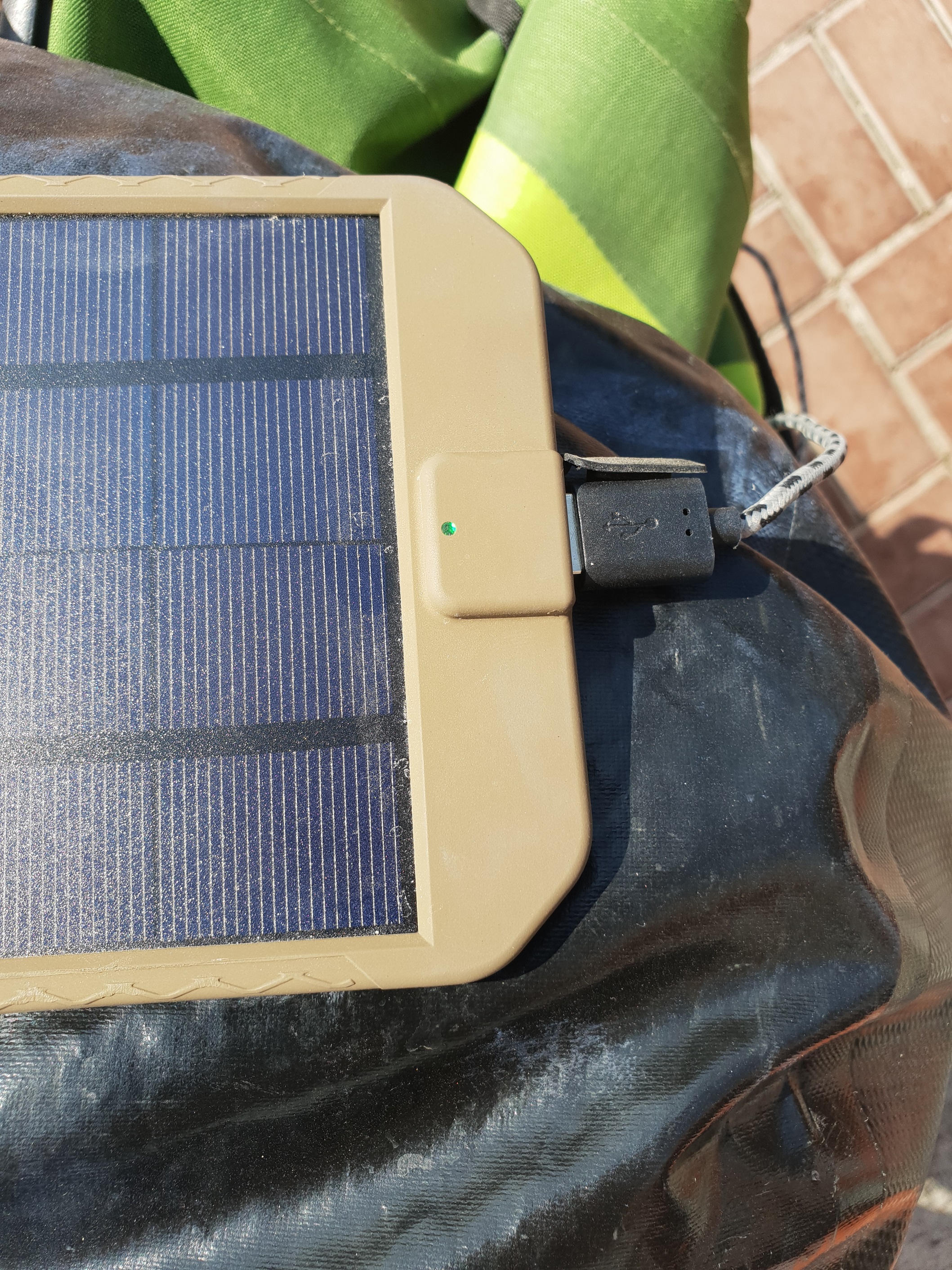 You can tell how full the power pack is based on the little red dot lights. There are four dots in total and the dots increase in number as the power pack fills. The top dot flashes when it's still charging. The dots are quite faint in bright light but can be seen clearly if shaded.

To check the amount of charge in the power pack, simply press the button to illuminate the lights. Press again to turn the lights (and power pack) off.

Charging devices from the power pack is equally simple. For low voltage devices, like a smartphone, small camera - or anything you might normally charge through a computer USB port - simply plug it into the power pack. The power pack will realise you've plugged something in and start charging. If it doesn't realise, simply press the button on the power pack to start re-fueling your device. 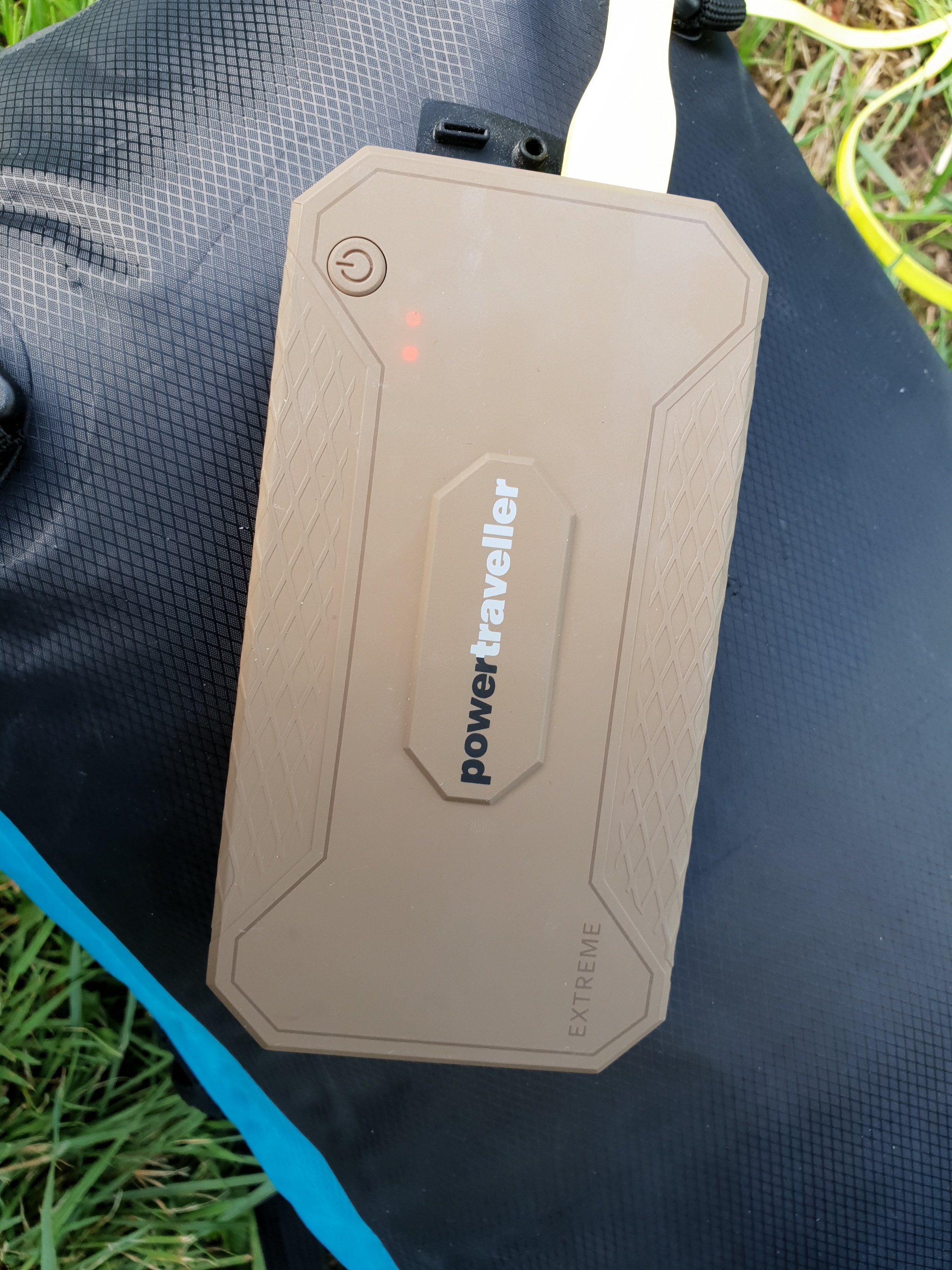 Although I never found I needed to, it is possible to charge the power pack and simultaneously charge a device from the power pack - as long as they don't require the same port to be plugged in.

The Powertraveller Tactical Extreme was very easy to fit onto my bike panniers. I was a bit sceptical at first, but the set up using a bungee cord (mine) and the velcro strap (provided) was very secure. I slipped the power pack into a side pocket on a back pannier and it never came un-connected. It could just as easily have lived inside the back pannier if I had no side pockets. The provided cable is plenty long enough for all eventualities. 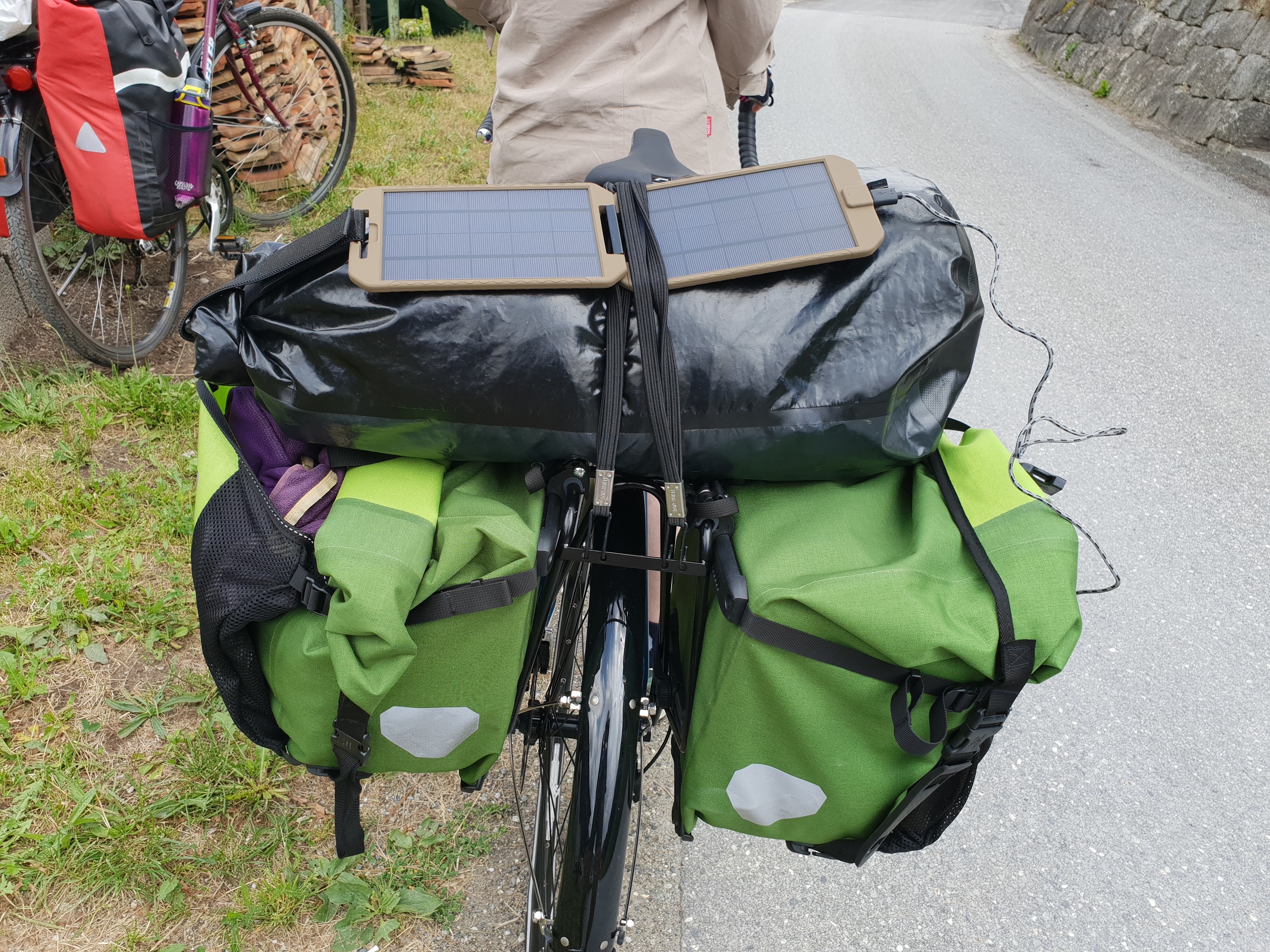 This is an incredible piece of kit - and I do not say that lightly. It is so hard to find equipment, never mind electronics, that does what it says it will and can withstand the regular abuse of adventure. It really felt like the Powertraveller Extreme had been designed by people who actually do this stuff. This is not a travel charger. It is definitely an adventure charger.

As you might be able to tell, I love kit that can withstand a good beating. Nothing ruins adventure fun like wondering if your kit will break every time you touch it. The Powertraveller Extreme is a solid solar charger set up that can thrive in outdoor conditions. Got a bit of rain on it? No problem. Muddy? Just wipe it clean. Drop it? Ah well. I don't have the patience to panic about electricals getting damp - turns out you don't have to.

The Powertraveller Extreme is by far the most reliable solar charger I've encountered. It is not temperamental or complicated to use. It just does its job and does it well. I cannot stress how brilliant it is to be able to depend on your kit like that. Plus it's a complete game changer for using things like cameras, phones and torches in wilderness areas. You don't need to ration your battery life because you know there'll always be more charge at the end of the day. 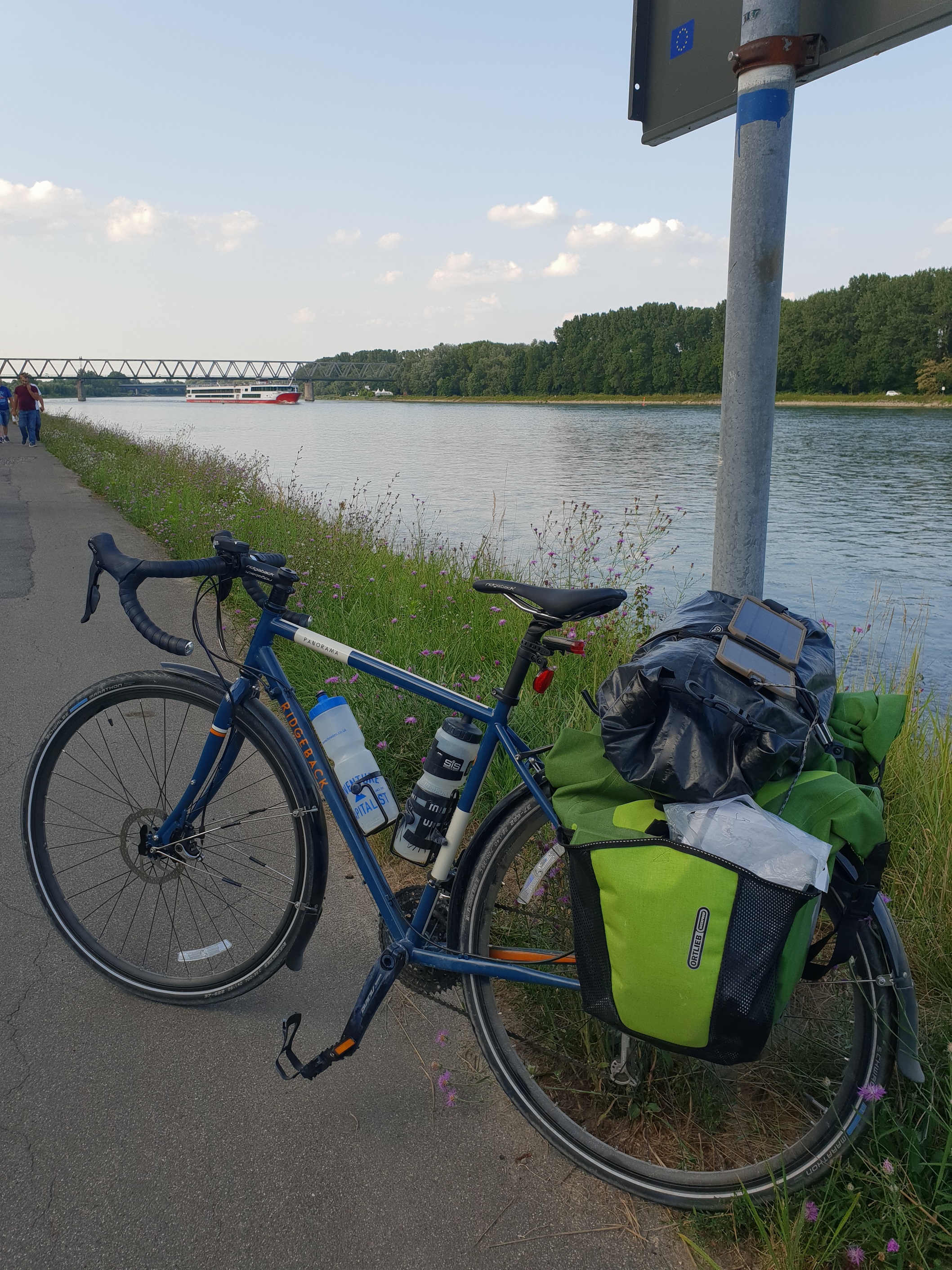 The Powertraveller Extreme comes with a good selection of connectors. Although you'll probably be using the USB to MicroUSB connector the most, having the other options saved a couple of disasters. Like when we unexpectedly had to ride a stretch of road at 9-11pm and my bike light was out of battery. Plug the USB into the connector and soon you're good to go.

Both of these are minor points that can be put squarely down to user error. Or - more specifically - me not reading the instructions. I did give them a quick glance over in the pre-trip frantic-packing stage, but clearly they didn't stick well in my mind.

For the first few days of riding in gorgeous sunshine in Switzerland, I assumed that when the light on the solar panel went green, that meant the power pack was fully charged. Er... no. As explained above, the solar charger light flicks between red and green to tell you how good the incoming sunlight is. The days were so sunny that I couldn't see the flashing red dots on the power pack to indicate it was still charging.

After cycling the Rhine and then taking just the power pack for a few days in the mountains of Slovenia, I was left with a tiny amount of charge and a conundrum. The instructions said to leave the power pack at 60% charge when storing, but it was a losing battle trying to recharge via solar in the UK in November. After several days of leaving it outside, I thought to myself, "It would be really good if I could just plug it into the mains."

Given how Powertraveller have thought of everything else, I thought I'd just better check that! Low and behold, the Powertraveller team delivered. Of course they'd thought about that! You can charge via the USB cable into a laptop or even into the mains if you have a spare USB to UK plug adapter. Perfect.

The Powertraveller Tactical Extreme is not cheap - there's no avoiding that. But it is worth every penny for its reliability and suitability for an adventure environment. I would definitely recommend it and will be using it for years to come.