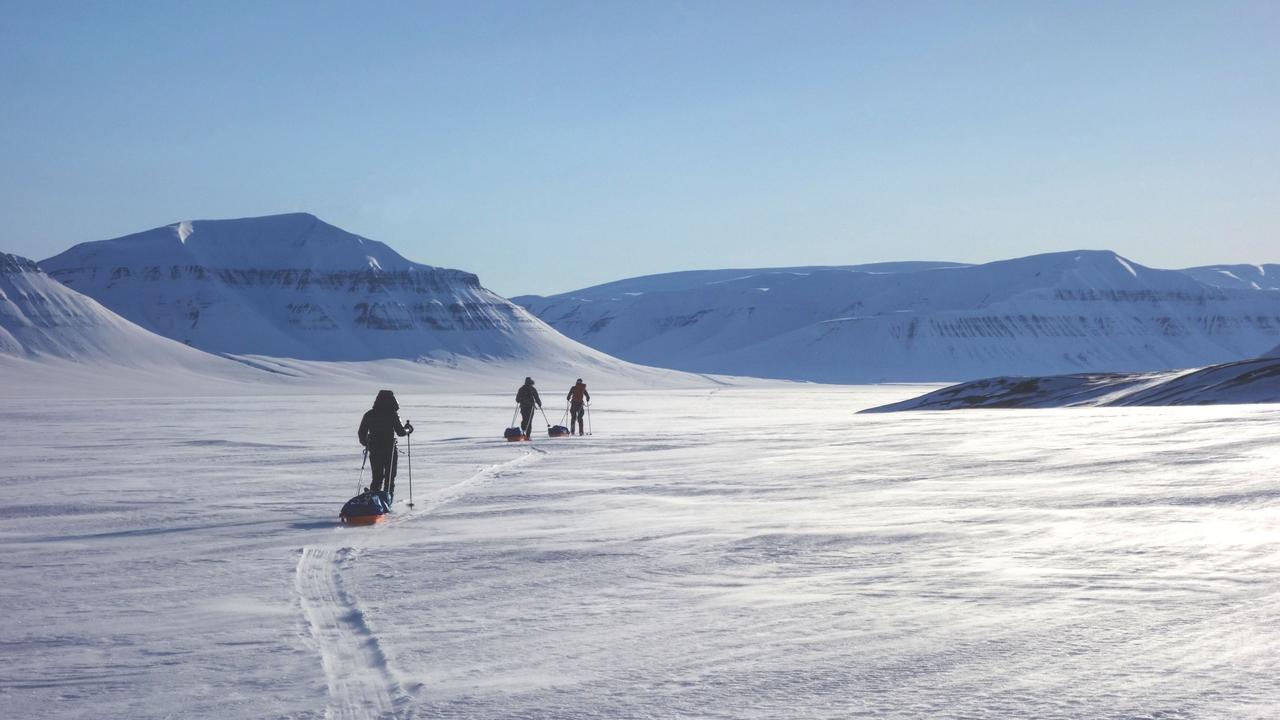 4 a.m. 20 degrees. Shivering in 5 down jackets and clutching a 1939 rifle we called Greta whilst scanning the horizon for polar bears. What on earth was I doing here?

It all started one Christmas Eve. My partner Neil and I had just returned from a 3 day trip to Norway which was our first time ski touring. I’d needed to bribe him out every morning with the promise of sweets and a hot chocolate at the end of the day, so by all accounts it was not a successful trip. But then, 24 hours after he swore he would never ski tour again, he suggested an unsupported expedition to cross Svalbard!

48 hours post trip, we had a Boxing Day conference call tempting our two friends Tom and Ben to join us. By New Year’s Eve, the flights were booked and we were going. We had less than 4 months to plan a totally unsupported traverse of Svalbard from East to West via its highest peak, Newtontoppen. Although we all had plenty of expedition experience, our days spent ski-touring could be counted on one hand and none of us were particularly skilled at polar bear dodging.

Nonetheless, on 23rd April with formal rifle training under our belts, we stood on Svalbard’s east coast watching the snow-mobiles that dropped us off disappear into the distance – our last vision of civilisation for the next 2 weeks. Staring out into the white expanse in front of us, we all shared a sense of excitement and felt a yearning to delve into the landscape beyond.

Neither the bitter Arctic wind nor heavy pulks could dampen our spirits as we set off into the wilderness. For those of you that don’t know – the population of polar bears outnumber humans on the island, and for many nights we had to sleep in shifts to make sure that we were safely guarded from bears. These shifts were definitely the most miserable part of the trip. Whilst it never got totally dark, it was bitterly cold and intensely lonely.

I suppose I was the lucky one. Being by far the smallest, I was able to wear everyone’s down jackets on top of one other to keep warm. Even with these extra layers, I spent most of the night shivering, spinning in circles to maintain a 360 degree view of the camp and spot any potential danger. Whilst I may have had the added bonus of fitting into extra layers, being the smallest also had its downfalls. I am notoriously stubborn and insisted on carrying an equal share of the kit. I was considerably lighter, and when hills got too steep, the weight of the pulk started dragging me backwards (even with full skins on my skis!).

Svalbard was breath-taking. We glided through magnificent valleys untouched by humans with pure snow stretching for miles and mountains on either side. Our technique improved every day and we even mastered the steeper downhill ascents more gracefully. Despite the beauty of our surroundings, trekking for hours on end towards a horizon that never seemed to get any closer was mentally draining. We all adopted different ways of coping with this. Ben and Neil could very much switch off emotionally and plough on. Tom opted for puffing continuously on his Vape and grumbling a lot under his breath. As for me…well…although not a technique I’d recommend, I sang out of tune to distract myself and had a good old cry behind my ski goggles every couple of days. 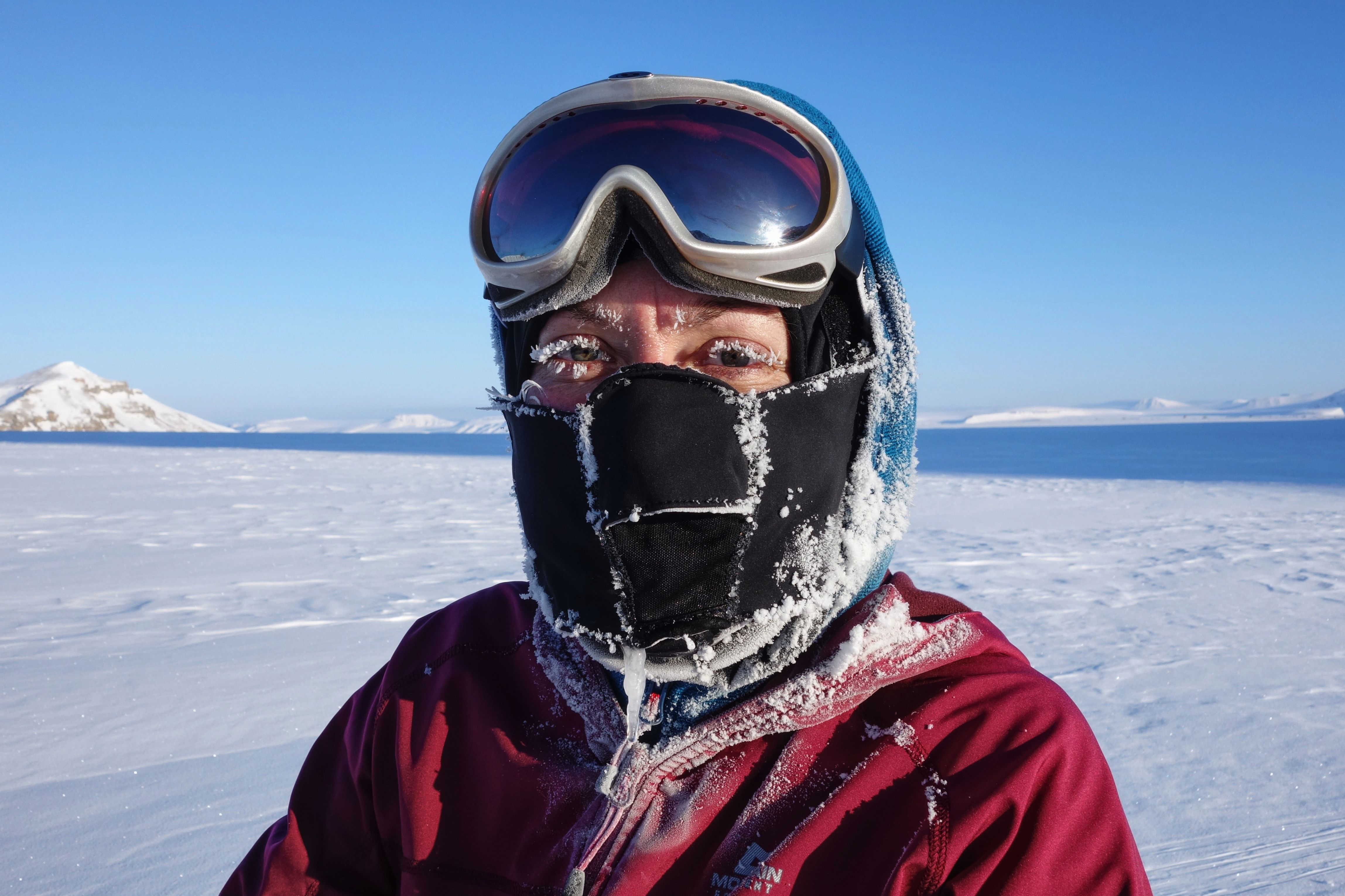 Progress was going well and even a few days of poor visibility didn’t slow us down. However, they say bad things come in 3’s and on the 4th day – boy did that happen! Firstly the fuel bottle in Neil's pulk leaked over everything. Not only was our tent doused in petrol, but we lost around a quarter of our carefully calculated fuel. Next, a seal on one of our water bottles split and leaked over some of our clothes, freezing them solid. Thirdly, we hit a valley of crevasses several kilometres long. We roped up and set off across what looked like a good route, with Tom leading the way as appointed crevasse poodle. However, before we even reached the visible crevasses, a deep drop opened up right in front of him. We are all experienced mountaineers and are used to dealing with these types of situations, but none of us had done this with the added complexity of dragging a pulk.

We decided to back-track the way we had come onto a higher ridge, but not before I had been ‘volunteered’ to go up to the crevasse edge and take a picture of its depth! Yet another perk of being the smallest…

The next few days were glorious. We spent time appreciating the remoteness and wild beauty of this unique landscape. Neil and I also managed to improve our cooking efficiency to cope with the loss of fuel and got our usage down to less than 125ml per person per day. Prior to the trip we’d had considerable debates amongst the team about how much fuel we would need and had settled on a higher amount. If we continued the rest of this trip at this new and improved rate, we would get to the end without running out of fuel.

By now we had reached the base of Newtontoppen, Svalbard’s highest peak. The visibility was perfect and we could see several coasts at once and also some of Svalbard’s highest mountains. Annoyingly, now we had reached the summit we could see snow-mobile tracks all the way to the peak! All that pain and suffering to get to the top and someone else had just zoomed up and back before we made it…

We were now on the route south to our finishing point at Longyearbyen and the landscape on the west side of the island was very different. Hills were a lot more undulating with fantastic fast downhill runs followed by the inevitable steep and painfully slow uphill climbs. There was also a large ravine section to get through, a route suggested to us by several locals.

Once at the bottom of the valley we made our way through the labyrinth of ravines hoping that the advice we had been given was accurate. We found ourselves frequently using the ropes to drop the pulks down steep drops as well as rigging up haulage systems to pull them out again.

Eventually we joined what was the main river route and before long the 'snow mobile motorway' back to Longyearbyen was visible in the distance. Civilisation was now nearby and just 2 days of flat skiing stood between us and our final destination. 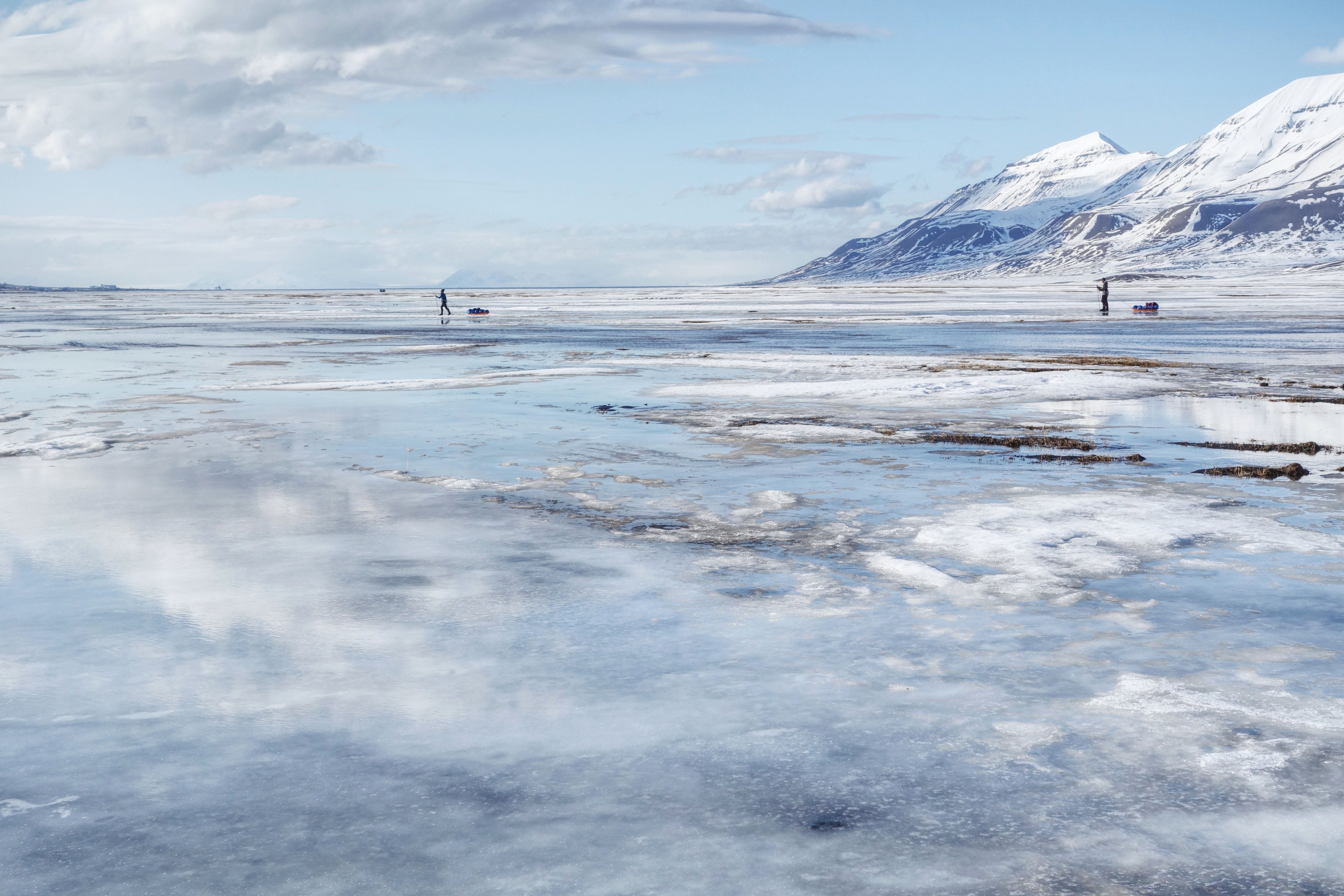 After 13 days and 250km, we finally made it to the west coast. Although not the most physically draining trip I’ve encountered, this was certainly one of the most mentally challenging expeditions in my life as an adventurer. Dealing with the intense cold, IBS flare-ups and long days of seemingly never-ending horizons made it hard to remain positive. However, we made it back with all our fingers and toes and only the odd case of frost nip!

So…was this more successful than our first ski touring attempt? A definite yes! Will I be doing it again?

Written by Leanne Dyke: Leanne is a keen outdoor enthusiast across several disciplines, enjoying white water kayaking, mountaineering, ice-climbing and caving. Although working full time in Finance she spends every moment she can escaping from the office into the wild and is a firm believer that you can still plan your own remote adventures despite working in a demanding business sector.